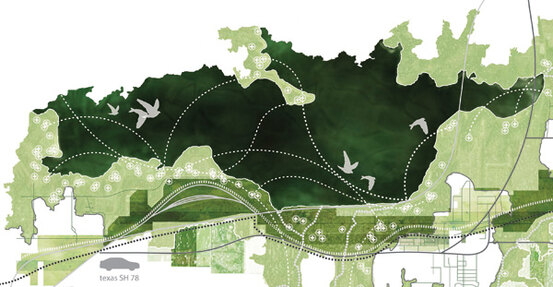 Wildlife infrastructure exists as a framework of migration courses and habitation patterns that are inextricably linked to critical human infrastructure. At any given time, there are countless “rivers of wildlife” migrating locally and regionally above and within the world we know. In conjunction with increasingly fragile climatic conditions, urban development is drastically disrupting this framework. Wildlife is essentially pushed to the urban periphery, as increasing habitat fragmentation results in detrimental conditions for species migration.

Wildlife movement must be treated as a critical component of regional infrastructure in order to promote habitat resiliency. As a recipient of SWA’s annual Patrick Curran Fellowship, which supports research and innovation, I structured my research around a new methodology for wildlife analysis that promotes a significant shift in the design paradigm for urban landscapes. As some of the greatest confluences of urban landscapes and major migratory flyways occur along the California and Texas Gulf Coasts, these environments became the focal point of my research.

I wanted to develop a planning and design tool that utilizes datasets to include wildlife migration as a critical component of regional infrastructure. I focused on acquiring regionally specific datasets with information about the ecosystems containing potential development sites. After an extensive digital literature and data review, I conducted in-person interviews with regional wildlife biologists, wildlife conservation and initiative program directors, spatial ecologists, GIS specialists, and university professors and department chairs with research efforts focused on urban wildlife. Organizations and agencies that provided datasets and consultation for this research included the Audubon Society, Ducks Unlimited, the Nature Conservancy, Texas Parks and Wildlife, the U.S. Fish and Wildlife Service, Defenders of Wildlife, Point Blue Conservation Science, the U.S. National Park Service, and professors at USC and UCLA.

I then designed a digital data source library in the form of an interactive infographic. This tool streamlines access to critical data by organizing a short-list of the most informative and accurate public datasets. The data can be used to both influence what should be prioritized and to affect the biological resiliency of a place through design decisions and strategies. 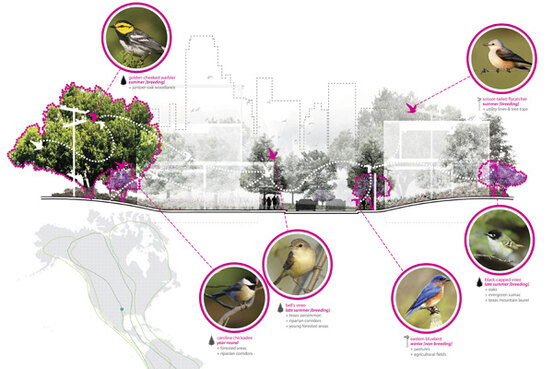 The initial phase of the library focuses on avian data, as birds are a keystone species indicating the health of ecosystems. The datasets provide critical information about avian species native to a particular site. Users are able to quickly learn about species currently present, as well as those that should be present in order to indicate a healthy habitat. They are also able to learn how to provide for these species in terms of habitat design. The four main datasets in the Avian Infrastructure library are:

With the exception of isolated occurrences of wildlife corridors, no overarching connectivity currently exists to allow for a network of urban wildlife movement at a regional scale. Without healthy habitat patches and directional connectivity to protected habitat, migrating species are at a severe risk of isolation from fresh water and food sources, as well as safe breeding and nesting habitat. The collective response from policy and decision makers, developers, and designers should be to use data and tools, such as the Avian Infrastructure library, in the design of urban landscapes to catalyze the development of this important network. Using wildlife data to drive our planning strategies will allow us to better protect our wildlife resources and enhance the quality and performance of our public landscapes.

Moving forward, I hope to expand the library to include terrestrial species, despite the challenge of obtaining data for these species within urban environments. I also hope to convert the library into a web-based application to allow for greater accessibility across the design profession.

Amanda Kronk, LEED AP BD+C is a Designer with SWA Group in Dallas, Texas. ”Wildlife Infrastructure” originated as a firm fellowship for research design and was the subject of Amanda’s recent talks at the 2015 ULI Spring Sustainable Development Council Meeting and the 2015 International Urban Wildlife Conference. “Wildlife Infrastructure” received a 2015 Texas ASLA Merit Award for Research.

Thanks to Our LPS Sponsors

Help build the LPS: Find out how to submit a case study and other ways to contribute.